This article serves a number of purposes. Firstly, for me to show off a couple of the scabbards I’ve recently made as a commission for an English Civil War living history group, secondly, to head off questions about the accuracy of the construction method and finally, to discuss the trends in scabbard construction and fashion during the late Stuart period. I’ve made a third one I made for my use, with normal stitched construction instead. I’ll write that up another time.
With these scabbards, I deliberately avoided using any modern leatherworking equipment. One reason was because I could, but the main reason is that it’s unnecessary and proves there’s no any excuse about not being able to find or afford the gear. Total time from start to finish on the two glued examples was three evenings while watching telly.
Here is a photo of the couple of glued scabbards. 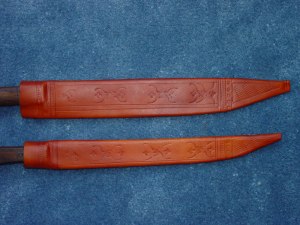 There. Now showing off is safely out of the way, lets get on with the construction. All three are based on scabbards from London in the late 16th and early 17th centuries. Interestingly, there appears to be a decline in the number of scabbards found during this time, but no corresponding decrease in the number of knife finds. This reflects a change in men’s fashion, where wearing a scabbarded knife was no longer de rigueur. In fact, there are a total of three scabbards known from this period, two of traditional construction, and one showing all the techniques of bookbinding instead. It is this last one I copied for the regimental scabbards, taking a bit of artistic licence making it one of a matched pair. Apart from it being a chance to practice my embossing skills, the main reason for the choice was that there is no stitching for careless people to cut when putting the knives back.
The top of the original scabbard is damaged, so I’ve based the way they fit the knife handles on some earlier scabbards and an early 17th century pen knife in the Museum of London.

After making a paper pattern and roughly cutting the leather to shape, the leather was dampened and shaped by stretching and clamping around wooden knife-shaped formers the same shape but slightly thicker than each knife.
The gluing was done once the leather was dry, before any of the design was applied. This was mainly to ensure that the shape was more or less final and embossed parallel lines were approximately parallel and the lines going around the blades didn’t spiral. If I’d done the embossing first, it would have changed shape where the leather stretched. If you prefer to do the embossing flat and then mould and glue, go ahead: that’s how I do scabbards with knot work designs where distortion of the design is less noticeable.
The design consists of stamped diamonds, fleur-de-lis and arabesques, framed with straight lines and highlighted with short parallel lines and dots. I made the diamond and lily stamps from scraps of metal lying about, the thin curves from the edge of a bit of thin steel cut off a forged spearhead socket, the rondelling with a plastic gear from elder son’s Meccano and the dots with an old bit of brass rod. The frame was embossed in the now traditional method with the back of a butter knife. The leather is 1.6mm veg tanned cow hide, glue was contact cement because I knew these would have a tough life and finished with olive oil, which protects the leather but is also food-safe.