The Gyspen is a specific type of black jack, usually small (up to a quart) with flat, tapering sides. The term only appears during the 16th and 17th centuries. They were comparatively rare when compared to wooden stave-built tankards or horn cups but are simple to make, easy to seal and light to carry, making them ideal for camping or on a march. 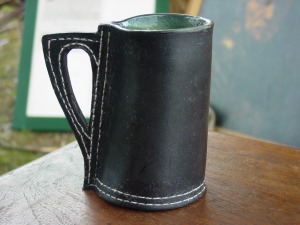 Gyspen, the bevvy in question is a small ale made with the second running through the mash used for Mr Webb's Ale. Height, 130mm, diameter 80mm at base.

Construction is fairly basic, involving one moulded base and a straight strip of leather, but teaches all the basic techniquse used for making jacks, bombards, costrels and most of what you need to know to make a bucket.

I made the base by cutting a 65mm disk of 1″ pine. Cut a 100mm circle of 3-5mm leather, soak it until the bubbles stop and then place the wooden disk on the skin side. Gently bring the overhanging sides up and secure in your preferred method. I usually push it into the end of a 80mm diameter stormwater fitting, I’ve used nails, cable ties or hose clamps to do the same thing in the past. Set it aside to dry.

Once dry, trim the upturned side of the base so it is 10-12mm high. Cut a strip of 3-5mm leather 320mm by 130mm to form the body of the vessel. The off-cuts around the handle are used as the handle reinforcing , you’ll also need a strip about 10mm by 320mm as the welt for the base. Play with a newspaper pattern until you are happy with the shape of the handle and the height of the thumb rest. Later vessels have a more rounded handle, up to the mid-17th century they tended to be more triangular and had a step down from the top of the vessel. When you cut it out, don’t cut the hole in the inside of the handle at this stage.

I was going to insert a pattern here, but it’s so simple you can work it out for yourselves. I just did a patern of the handle and measured the rest.

The body should be roughly shaped – dampen and lightly clamp with a straight edge about 10-12mm away from the inside edge of the handle. Fold the handle up at 90 degrees and secure with another clamp and leave to dry. Repeat for the other handle. Dye all pieces and leave to dry again.

Bring the handles together and put the handle insert in between them. You should have a tapering cylinder with an internal diameter of about 90mm at the base and 60-70mm at the top. Sew one of the two straight backseams, don’t worry about stitching the handle at this point. 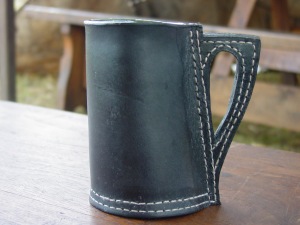 Insert the base, taking care to have it the right way up – it should go in like an inverted “U”. Push the welt in between the base and the side. It is best if the ends are cut at a diagonal so they can be overlapped without being thicker then the rest. I usually put the join about 90 degrees from the handle so I don’t have all the weak points in one spot. Do both base seams, then finish the back and do both seams around the handle. Cut out the centre of the handle and trim any unevenness around the base. Re-dye the cut edges and finish with beeswax polish. I’ve done the interior lining in the one pictured with rosin, a white form of pine pitch. 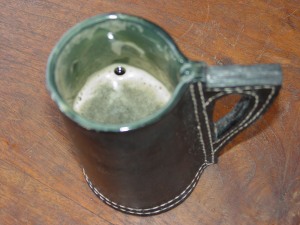 Fairly obviously, this is a half-pattern, draw to the centre line and then turn the pattern over. The construction lines on the handle shows how I marked it up.