This post has been in preparation since late 2014. Case and tense is all over the place and my brayne is too addled to straighten it out. I’ve added dates to each section, so you can get a feel for the creative process. Now read on…

My friend Helmut is a musketeer, he wears a black floppy hat and carries a musket that according to legend, weighs 30 pounds. He owns a Spanish cup-hilt rapier that he won from a Spanish soldier in a game of La puta madre during the 30-Years War. Unfortunately, the scabbard and baldric* also date from the 30-Years War and are starting to show it. In this post I’ll demonstrate the process for making and decorating a rapier scabbard, I’ll loosely base the decoration on the Mary Rose one (if anyone challenges me, I’ll hide behind Margaret Rule’s observation that if the Mary Rose hadn’t been so securely dated, all the artefacts would have been dated 100-years later). There’s a joint on the still shawm that wasn’t even invented until the clever French people did it in the mid eighteenth century. 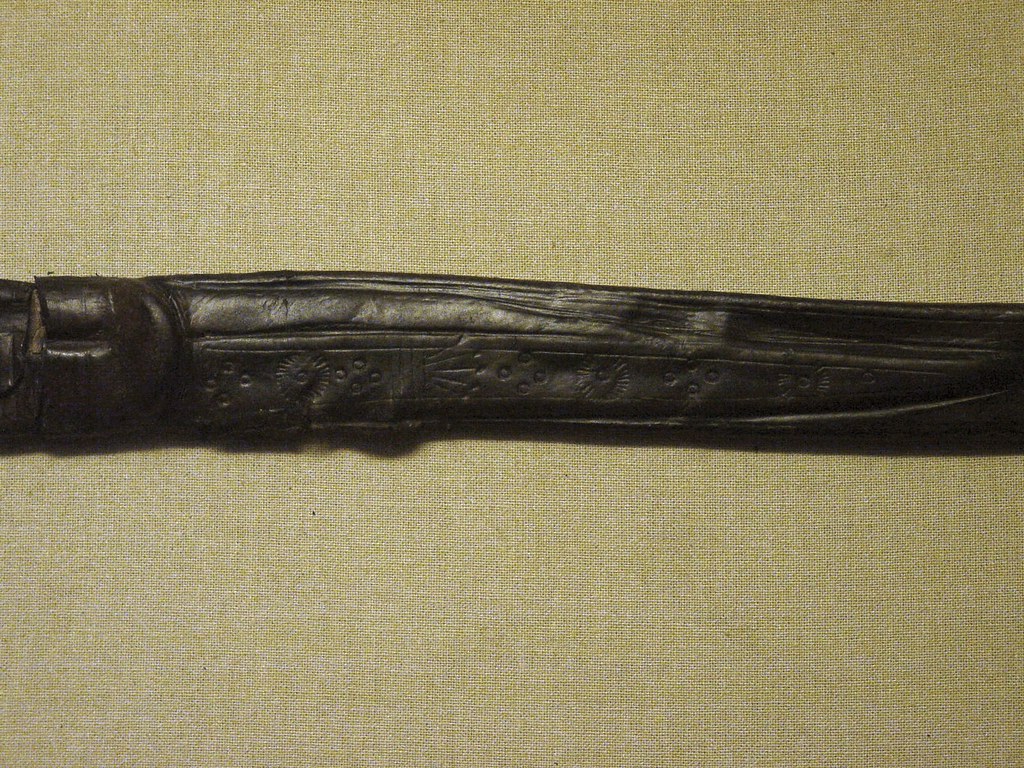 Mary Rose rapier scabbard (my photo). I’m using the impressions to tell me what tools to use in my design. I’m taking the frame and mouth decoration more or less directly, everything else is freestyle using the same tools that I would have used if I was creating this scabbard.

It should be noted that I hold Helmut personally responsible for my dreadful obsession with the work of Mr Mindum, which I sometimes inflict on you poor people. This will become relevant later.

* A rapier is a gentleman’s blade and normally worn from from a highly decorated waist-belt rather than a baldric. For the purpose of the exercise we’re assuming Helmut lost the round the belt was played for and had to get a baldric made by a local leatherworker that didn’t know the difference.

I’ve had this since September, it’s now March and I haven’t started on the leather. To be fair, I’ve cleaned the sword and removed the burrs and the worst of the chips from the blade, repaired the grip, straightened the cross and reblued the hilt.

I like to make a copy of the sword blade in hardwood so I can wrap it in wet leather without worrying about rusting anything.  It gives a firm surface for tooling, draws some moisture out of the leather and gives nice, crisp edges. Functionally, it’s similar to a last for shoe making. It can be made a little larger than the sword, so you don’t get problems with the finished scabbard being too tight. Don’t forget to add extra timber to allow for any ears on the hilt that might need to be covered by the scabbard. You’ll also need extra length so the chape can be riveted on without leaving the sword sticking an inch or so embarrassingly out of the scabbard. I know others are happy with just wrapping the blade in plastic, and/or gaff tape. Do whatever works for you.

Yeah, I made the patterns back in January, just needed to fix the shape of the point a bit. Two months later…

Realise that arrow order is due in one month, not two…

It took nearly 3 minutes to finish.

Cut the leather, wet it and clamp it around the pattern. Once it’s dry, remove the clamps, cut to shape and do the two raised bits around the scabbard mouth. I have a bit of hardwood with a “U”-shaped groove about 6mm wide for this sort of work in leather or brass. Flatten the scabbard out again, wet the leather, put it skin side down on the grooved block and hammer a brazing rod in from the flesh side.

Moulding the leather on the wooden pattern, I’m using a couple of lengths of primed timber to clamp the seam.

Step 7: Stitch (August 29 – September 6 while watching the telly)
Make the awl holes and stitch. I’m using edge/flesh stitches to get a flat seam, other seams may be appropriate according to your period and type.

Stitch the back seam, you can see the pattern poking out the top end. I’ve wrapped it in plastic film so it doesn’t swell when wet.

Step 8: Decorate (September 7)
The decoration is informed by the Mary Rose rapier scabbard, a stack of 17th C knife scabbards in the MoL and other places and 17th C furniture and embroidery designs. I quickly carved a new stamp in the end grain of a bit of broom handle. It took 30 minutes and involved curved chisels, a scriber and a short length of 4mm diameter copper tube. It’s a nod towards the two flowers on Mindum’s Jayne Ayres shoehorn of 1593 and a reference to Helmut’s influence with my obsession interest. I’ve covered stamp making before so won’t go into detail here.

The smaller flower is a commercial stamp from the leather store, the small circles are a 1.6mm ∅ nail punch from the hardware and the rest is done with the back of the butter knife (you knew that bit already, didn’t you?). If the leather has been cased properly, the smaller stamps can be done using hand pressure alone. I’m using the wooden pattern to provide support while I’m leaning on the punches and embossing with the butter knife. The bigger stamp was smote with a mallet, with the wooden pattern in place and the whole assembly resting on a block of softwood.

Decorate to taste. Tools include hand made and commercial stamps, a nail punch and the back of a butter knife. The bone and squirty bottle are for flattening the back seam.

Cut the straps for the baldric. There will be a lot of decorative stitching on the front where it meets the scabbard. Hold off until after the dying’s done.

The stitched but undyed baldrick. I lied about dying first.

Colour and method to taste. The baldric is saddle tan with black outside the line where the decorative stitching is going to be. This should help the idea that the scabbard and baldric were made by different people. On the scabbard I used a tan base and overdyed red with the new “safer” water-based dyes. It’s supposed to be colourfast and waterproof when set.

Stitch the baldric together, do the decorative stitching.  This next bit is straight from the MR scabbard – split the wooden form lengthwise and hollow out space for the blade. Glue it in with barley paste, hide glue or PVA, whatever you are comfortable with and can self-justify.

A nice solid coat of beeswax and put it outside in the sun to soak in.

I made an early delivery to Helmut so he could test it and see if there’s any changes or adjustments to be done. The chape is still on the to-do list for later. Helmut used it at the St Ives Medieval Faire. Oh Noes! Disaster! The red dye washed out in the rain, leaving it all spotty where the drops splashed…

Scabbard (sans chape) in the pre-deluge colour and finished baldrick.

This was always going to be the final step after the St Ives test to see if there was any fettling required. Fold a chape from sheet brass, decorate and polish. In the final fitting the chape split along the line of the decoration. I’m beginning to think this scabbard is cursed.

… or so I thought. Helmut wasn’t there at the drill, so I’ll take it or send it along to the next event.

One door finally closes properly, another breaks. This one is from our 1880s sideboard, and needed the pin the lever springs push against replaced. #twoleverlock #herewegoagain