Sorry about the delay between updates. That’s my workshop, right in the middle of the purple bit to the west of Sydney. We took the thermometer out there in the last heatwave and it got to 57°.

It’s been like this since December, we get 3-5 hot days followed by two relatively cooler days in the low 30s. Rinse, repeat, rinse a couple more times.

Progress has been slow, because the embossed and moulded parts need me in the workshop making the moulds.  Here’s the progress so far.

Transfer the patterns to the leather and cut out the shapes. The triangular bit of waste at the bottom right is used to make one layer of the suspension lugs. The stringy bits will get used too.

Mould the bottom bits. This is the front, it took about 20 minutes to get it to shape, I just used hand pressure to hold the leather in place while it set. The embossing (copied from the original) helped it sit the way it was supposed to.

The back comes further around to the front. Another 20 minutes in stupid heat with hand pressure. I used my thumbs to work out any small ripples in the surface. The front piece is drying in the background.

The account in Die Lederfunde Von Haithabu shows narrow folded bits of calf-skin and suggests that they may have been used to edge the larger pieces. I’m going with 1mm calf-skin and using 3mm diameter cotton piping cord inside to help give it shape. While there’s no trace of fibre inside the folded fragments on the originals, there is leather filling the top roll. It’s what I would have done had I been making the original. Dipping the ends of the cord in beeswax stops them fraying.

To help hold everything together and avoid puckering or bagging, I used basting stitches to hold the piping in place before attaching the multiple layers together. In this case, on the lower front piece.

The mounting lugs are made from two layers, with a moulded ridge so they sit further back on the hip than would otherwise be the case.

The front is complete, I’m about to attach the suspension and then attach the back. Basting stitches again hold the piping in place until I can get the parts all stitched together.

I’m now a bit further along than shown in the picture, but I haven’t yet got to the point of splashing dye around. I’ll do another update when I get there.

I keep meaning to do a post about the way I do the “Y” shaped straps on things. Rather than cutting the finished shape and wasting a big triangular piece of leather, I cut a strap twice the finished width, split it for the desired length and then wet the leather and stretch it to shape.

The approximate pattern on the hide. Sorry, I had meant to take a photo of the leather marked up but got carried away…

Wet at least the intersection, stretch the arms to the correct angle and work any bulges or wrinkles out with your thumbs. Let it dry.

Trim and skive to taste. I’ll be using these later.

IMOLC have recently discovered that they don’t own the collection of jacks, bombards and bottels that they’ve had on display in the old museum for the past 70 years. They have until the start of March to crowdfund £33000 otherwise the collection will be broken up and sold off.   For details, see IMOLC’s blog post.

A small part of the collection

Imagine if you will, the Museum of London, late on an uncommonly warm summer afternoon. The kids are tired and grumpy, I’m already worn out from three weeks of travelling and we’re belting through the last few cabinets in the Great Fire exhibition so we can fit in dinner before presenting to the Globe’s performance of Coriolanus in the evening. I’m really not paying attention and just snapping photos of anything of leather, bone or horn with plans to review them later…

Which I did accidentally last night while looking for examples of refectory tables with cleats that pass through the apron frame but aren’t attached (for the record, there’s one in The Great Oak Room in the Red Lodge, Bristol). That’s three months short of ten years. We were there in April 2006.

The last three frames of the set are William bloody Morris’ bloody powder-bloody-horn made by Robart bloody Mindum in 16-bloody-01.* Do you know how much time I’ve spent trying to get a clear photo of the powderhorn in the intervening time? The museum placard doesn’t help: “Powder horn made for William Morris, 1601.” If you didn’t know it was by Mindum, you wouldn’t have learned much because the inscription is turned towards the wall of the cabinet. For whatever reason, it didn’t trigger the Mindum alert at the time and didn’t stick in my memory. 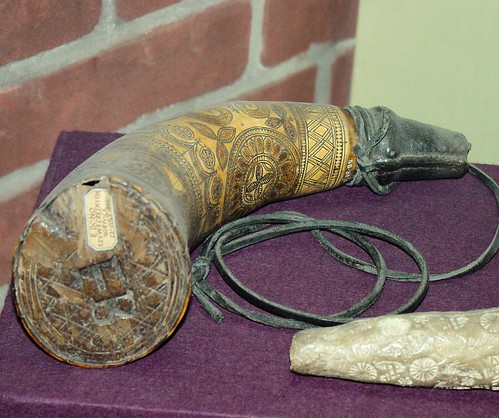 Construction is classic powder horn. The base is pressed/glued in because the last thing you want to have if the powder catches alight and goes off is a nailed-in base causing compression. Having third-degree burns still beats losing a leg in the ensuing explosion. The moulded leather collar and carrying thong are probably original. Like on the 1600 Hinson shoehorn, the initials of a previous owner are branded on the base. The owner in 1888 was Rev W F Creeny who donated it to the MoL, so we know it was sometime prior to that. 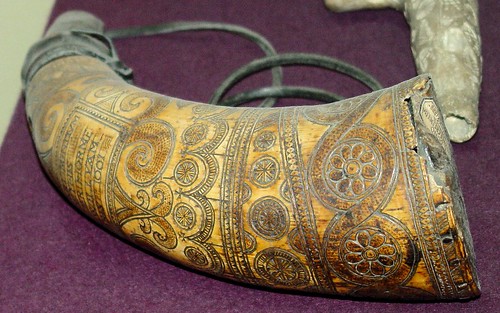 The design elements are the same as on his shoehorns, with bow-ties, triangles, foliage trefoils, scroll-work and flowers, although the inscription is done inside a frame rather than around the edge. He’s separated the decoration into fields with the use of borders, larger triangles featuring in groups of two, and smaller in groups of three. My instinct is that they are the same size as the ones on the Hinson horn, but I’d have to measure them to be sure. The flowers/marigolds are within a knotwork band, I wonder if he got the spacing right this time, or if they get all mushed up together around the back somewhere to make it all fit. 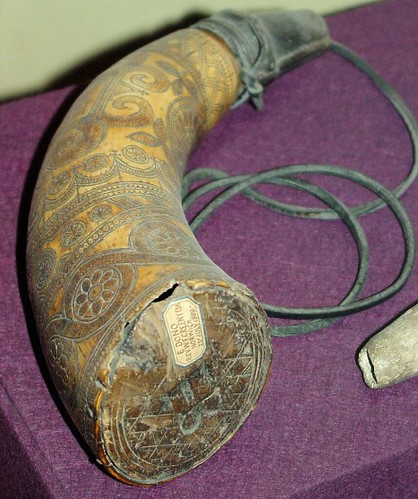 I think the majority of the stippling is red, the rest of the line work is black. The base has a simple circle and diamond grid design as it wouldn’t usually be seen.

It looks like I have a couple of thousand photos from 2003, 2006 and 2011 to review soon to see if there are any other gems amongst them.

For discussion of the complexities of the observance of ‘Straya Day, see this post on the Australian National Maritime Museum’s blog. 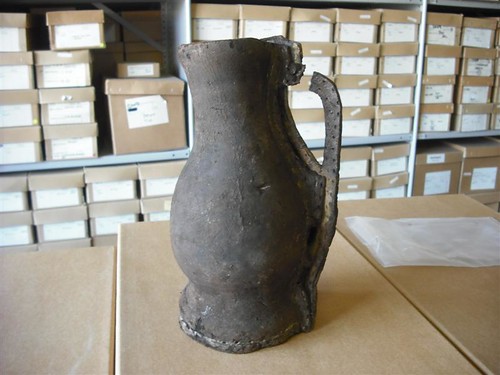 The Watling Court Bombard was found, oddly enough, in a dig at Wattling Court. The London Archaeological Archive catalogue gives the dimensions as 240mm high and 150mm wide at the maximum point. Allowing for the handle, that makes it roughly about a two quarts (2.4l), or maybe a little larger. Period is given as 1066-1485 from the find context, from the shape of the body and handle, I’d put it at the later end of that range. A 15th century carving on the Buttery Hatch at New College (pictured in Baker on p91) is a good match. The shape is more globose than the ones I’ve done, but is the sort of shape that lends itself to use of the “puzzle mould” for shaping. 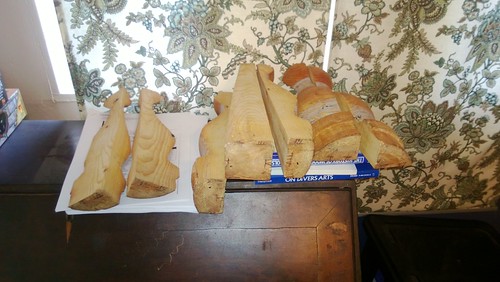 I haven’t been able to find any views of the base, so I can’t say how many layers there are between the base and the side. The back seam stitching up through the handle is missing and the welt piece has gone, but there must have been at least one layer in the handle and back as well.

A friend pointed this one out on the Internet and I had to share it and my musings.

This is a lovely piece and it’s really nice to have the dimensions. The person writing the catalogue entry probably honestly believed the bottle to be English based on the current location and of just an unusual form, optimistically dating it to the 17th century based on the patination and stitching.

I have a problem with the description: I think the bottle form is Arabic. You can see much earlier examples showing similar features here. If you look closely at the top, you can see a hole where a missing strap handle was attached. Similarly, there are a few stitches missing on the spout, it looks like the spout has been damaged and the leather trimmed to straighten it at some point.

I don’t like the date either. I’d be very surprised if it is earlier than 1850. It’s probably a souvenir of the Nile campaign of the 1890s, bought back by one of the soldiers. There’s a more complete example in the Museum of Lincolnshire Life in Lincoln that is firmly dated to that period and that provenance. It even has the same decoration. Here’s my photos (you knew this was coming, didn’t you…)

Note the height of the spout and the arrangement of strap and cord handles.

Close up of the base showing the base and side stitching and the roped and beaded decoration.

Handle decoration. The edges are bound with another layer of leather.

View of the spout and showing the strap handle in profile.

Those that have been reading since April will no doubt be pleased to hear that I finally finished the Mary Rose Costrel 81A5749, and that is has been safely given to it’s intended owner.

Front as defined in BTM, although I still secretly believe this to be the back.

Observant souls will also notice that since I now have a lathe, everything will now be turned whether it wants to be or not.

While it’s a nice looking bottle and the new owner is very happy, I’m still disappointed with it. The problems with the pitch and having to change the colour spoiled this one for me.

*ie. Totally unprovenanced shape, the lathe was still doing most of the steering at this point. I just went along with it.