At one event or other, Glenda and I were struggling with the usual Anglo Saxon sock problem – foot shaped bags made from woven cloth that were probably accurate but weren’t really confortable. Jenny offered to make us each a pair of naelbinded socks in exchange for a small Rus knife that she could wear slung off her girdle. 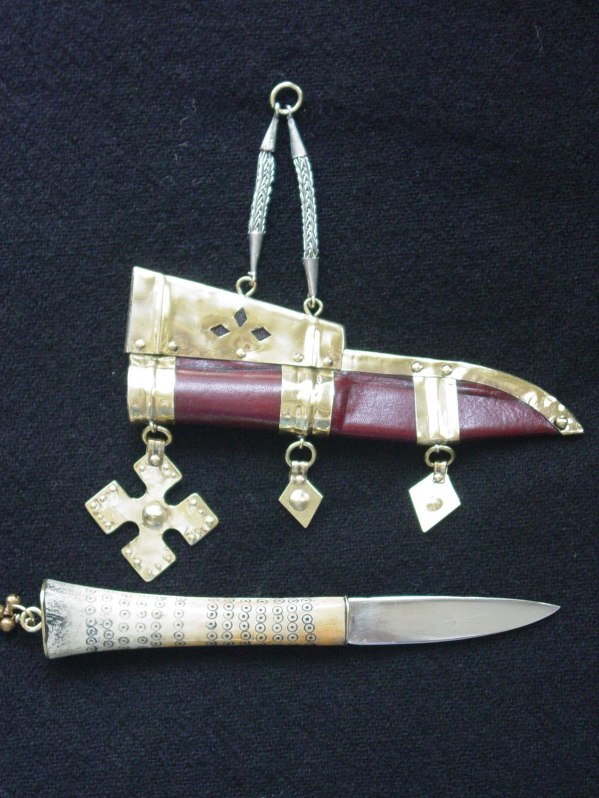 The knife is based on photos taken by Chris Morgan at The Hermitage museum in Russia and augmented by photos I took of similar period knives in the Yorkshire Museum in York. To be honest, the blade isn’t the shape I’d first planned, but the steel didn’t want to be that shape so it’s the same as another one that the steel was happy with from the place and date. My black smithing skills are a work in progress. The scabbard is also more complex than the first one I’d chosen, I had planned to do a plainer/easier one but when Glenda’s socks arrived I realised how much effort went in to them and stepped up a notch.

The steel is a medium-carbon (0.6%) cutlery steel from a billet left over from the 1940s that I was given on the proviso that I used it to make “medieval” knives. Hilt is a lamb leg bone, left over from a roast dinner, fittings are brass, the scabbard is 2mm vegetable tanned top grain leather, dyed with one coat of red Raven Oil and one of whisky Raven Oil. The chain is made from fine wire that I thought may be steel, but now suspect is stainless florist wire. Fittings on the chain are tinned brass.

I tried to do as much as practicable with hand tools. The blade was forged and heat treated, then ground to shape. The bone was cleaned, boiled and then left in the sun for the ants to finish off for a couple of months. Dot-circles were done using a tool made from a large iron nail, turned in a drill. I figure they could have used a bow drill to do the job. The brass edge strip was made by working sheet over an iron mock-up of the finished scabbard edge, and the rides in the bands were done in repousse using a block of Sydney Grey Gum (farmed on site) with a groove cut in it and a piece of 3mm brass rod tapped in from behind with a hammer.

My initial sketches of the blade and hilt

The blade and hilt were assembled, and then the leather was wet, wrapped around the knife and clamped to dry. The brass cross and diamonds were cut, embossed using repousse techniques of the Viking period, and then attached to the mounting rings with riveted brass strips.

Assembly was a simple matter of holding it all together and banging a few rivets in. After that, the scabbard and knife had the various bits of trim attached with rings. The bells on the hilt serendipitously came from a new skirt Glenda had just bought. The kids were annoyed by the ringing, so they were removed and became surplus. Due to my habit of corroding metal, I wore light leather gloves throughout, and lacquered the hilt and scabbard once complete. The blade has been lightly treated with olive oil.

The knife in question.

The knife on the right is the one I’d originally planned to do… the bands on the scabbard and the edge are really from this knife.

And some of its friends showing off bone hilts. The top two show a similar flare at the back.

Basically, keep out of the rain, and dry the knife if it gets wet. The blade and bone parts of the hilt could do with an occasional wipe with olive oil, and at least once a year, feed the leather parts of the scabbard by waxing with a commercial pure bees’ wax and turpentine furniture polish from a reputable furniture store, and buff off. I’m happy to do any necessary repairs short of a complete remake.

Thanks go to Chris Morgan for supplying photographs and design consultation.